Previous registry studies have noted increased rates of unemployment in patients with ankylosing spondylitis (AS)(1-2). With improved treatment options and earlier detection of AS, it was anticipated that this would no longer be true.

The Ankylosing Spondylitis Registry of Ireland (ASRI) is a source of epidemiological data on AS patients in Ireland. The aim of this study was to examine unemployment rates in this population and possible links with disease activity, function and quality of life.

An analysis of the current patient population of the ASRI was performed using IBM SPSS Statistics version 25. Comparison of the mean ASQoL, HAQ, BASDAI, BASFI and BASMI scores were carried out between the employed versus the unemployed. An independent two tailed t test and a Mann Whitney U test was then carried out to determine significance. Further analysis was then done on age and disease duration.

There is a higher prevalence of unemployment in the AS population as compared to the general population of Ireland. Unemployed AS patients tend to have decreased quality of life, poorer level of function, and higher levels of disease activity. Further research is needed to determine causation between level of disease activity and employment. 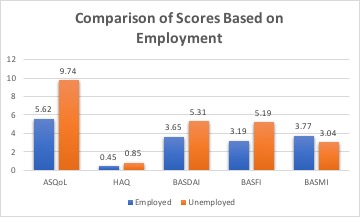