Tocilizumab is a humanized monoclonal antibody that inhibits cytokine interleukin-6. The British Society for Rheumatology recommends lipid monitoring in patients receiving tocilizumab - fasting lipids at baseline and at 3 months into treatment.1

We carried out an audit looking at lipid monitoring in patients on tocilizumab between August 2016 and February 2017. It demonstrated that even if patients were having their lipid profile checked the results (when high) were not always acted upon. We have therefore identified a need for ‘new subcutaneous tocilizumab progress chart’ with the reminder to check lipids.

We looked at all patients newly commenced on subcutaneous tocilizumab between October 2017 and April 2018. Eight patients were identified and retrospective data collection from medical charts was performed.

References:
1. Malaviya AP., Ledingham J. et al. “The 2013 BSR and BHPR guideline for the use of intravenous tocilizumab in the treatment of adult patients with rheumatoid arthritis”. Rheumatology 2014; 53:1344-1346 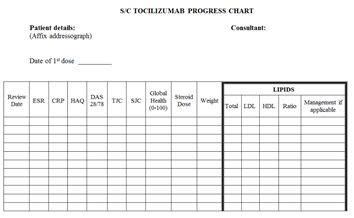