Resolution of complete heart block with immunosuppression in granulomatosis with polyangiitis (GPA). A case report.

We describe the case of a 78-year-old man, who presented to the emergency department with right conjunctival haemorrhage and severe right sided occipital headache.

He had a three month history of fevers, night sweats, weight loss, malaise, haemoptysis and productive cough, on a background of previously treated tuberculosis (1960’s). He was initially treated as a lower respiratory tract infection. His initial chest xray was within normal limits. A CT demonstrated peribronchial foci of groundglass opacification in the right considered to be either infectious or inflammatory with bilateral upper zone scarring granulomata in keeping with previous tuberculosis. His sputum was Ziehl-Neelsen stain negative. His symptoms worsened despite broad spectrum antibiotics.

He was treated with prednisolone and Rituximab (1g x 2) with latent TB prophylaxis. His condition improved. His heart block resolved fully over three weeks with therapy suggesting that this was an infiltrative process. His creatinine stabilised at 155. His respiratory symptoms resolved.

This case highlights the multisystem nature of GPA and is unique in demonstrating resolution of complete heart block with treatment of same suggesting early identification of intraventricular conduction delays and prompt therapy may prevent permanent cardiac rhythmic dysfunction. 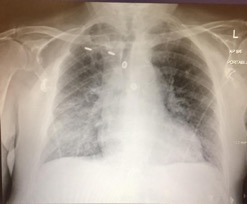