Rheumatoid arthritis is a chronic systemic inflammatory disease . The environmental triggers in genetically susceptible patients causes synovial hypertrophy and chronic joint inflammation along with the potential for extra-articular manifestations.

68 year old gentleman, smoker, frequent drinker presented with frequents falls without having significant medical history. He denied fatigue, weight loss, joints pains, Reynaud’s phenomenon, hair thinning, skin changes, dryness of eyes and mouths .CT brain was nil acute with generalised cerebral and cerebellar changes advocated further imaging MRI brain. Interestingly, MRI showed the micro vascular change in the brain with odontoid peg is eroded and considering last findings MRI cervical spine was being performed which demonstrated minor pannus at the atlantodental interval with some osseous erosion and mild marrow oedema. Multilevel spondylotic change in the cervical spine .To rule the cause of erosive arthopathy Rheumatoid factor, anti CCP, serum uric acid and connective tissue disease screen was performed. Subsequently, Rheumatoid factor was 147IU/ml (0-19IU/ml), Anti CCP, CTD screen negative, CRP was 15.12 and serum urate is 215.
In the summary, we are left with the evidence of erosive disease, along with some evidence of inflammation of atlantoaxial junction with slightly raised CRP and strongly positive rheumatoid factors lead to opinion about the certainty of Rheumatoid arthritis and this is highly unusual presentation and wouldn’t meet the classification criteria .Patient was commenced on disease modifying agent. Plain film radiographsof cervical spine on flexion and extension was performed to check the stability of cervical spine which was normal. Patient is on regular follow up list under Rheumatological services.

The incidence of asymptomatic cervical involvement in RA is high with reports of 33 to 50% of patients having no symptoms, and thus heightened awareness of the frequency of cervical involvement is paramount in the early detection of the beginning stages of the disease even in the absence of symptoms.It is crucial not to miss signs of myelopathy given the increased morbidity and mortality associated with the onset of neurologic deficit in patients with RA. 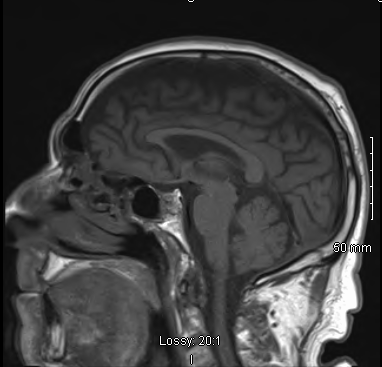 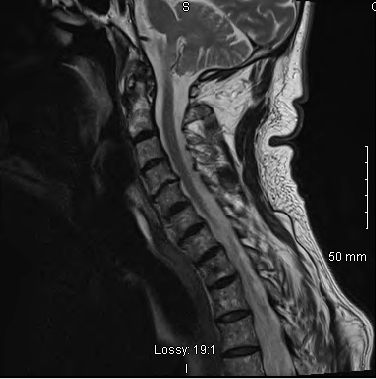